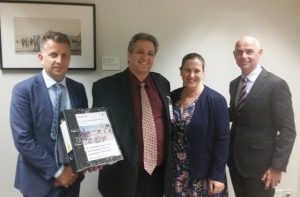 A survey using information from the registration plates of vehicles parked at Leppington and Edmondson rail stations will be undertaken to find out where commuters are coming from.

That’s one of the commitments obtained by commuter carpark campaigner Michael Andjelkovic when he met with NSW transport minister Andrew Constance on Tuesday, May 22.

Mr Andjelkovic presented the minister with a petition signed by almost 6,000 people calling for more commuter carparking at the two stations.

He said that as well as the commuter survey, Mr Constance indicated Landcom and Transport for NSW will be asked if there is any land that could be used for parking at Edmondson Park.

“The minister also promised a review of the land owned by state government to see if it can be turned into additional parking at Leppington.

“There would also be a review of the state budget to see if there are funds available for multi level car parks to be built,’’ Mr Andjelkovic said.

Member for Holsworthy Melanie Gibbons, Member for Camden Chris Patterson and two Transport for NSW representatives attended the meeting with the minister.

“I was thanked for starting the petition and providing information for the Liberal MPs to use to strengthen their argument for more funds to resolve the parking crisis issue – and to be fair I have sent the same information to the Labor MPs also,’’ Mr Andjelkovic said.

“The campaign for more parking will continue until a firm commitment is obtained from both major parties to provide multi level car parking at Edmondson Park and Leppington stations,’’ he said.