68 'It hits a nerve': the politicisation of the population debate

In order to cope with the pressure of an ever increasing population the answer is to build the critical infrastructure needed: high-density housing, better roads and public transport, hospitals and schools.

And provide adequate Car Parking at the train stations. #MoreParkingNow

Bob Birrell is no stranger to controversy.

The 80-year-old, Princeton-qualified academic, has spent most of his career warning of the pitfalls of what he sees as too-rapid population growth in Australia.

But even to Birrell’s mind, this week’s extraordinary political intervention by NSW Premier Gladys Berejiklian, calling for a reduction in the rate of migration into Australia’s most populous state, stands out as a turning point in how state governments plan for a growing nation.

“There has been planning, but not of the sort which says : ‘We have got major problems here, it’s really difficult to retrofit a city, it might be time to have a break.’ That’s now changed. That’s what’s so significant about this past week.” 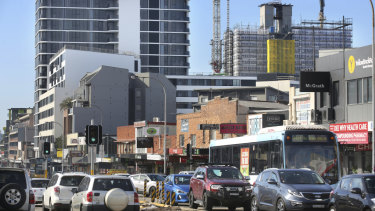 Dutton’s ‘reset’ to the 457 visa program, announced in April last year, has staunched the inward flow of temporary workers, making it both more difficult for employers secure visas for temporary workers and also “drastically reducing” their ability to transfer them onto permanent visas.

Another significant move under Dutton, says Birrell, was the shift to regard Australia’s annual permanent migrant intake of 190,000 – which arises from previous modelling showing it to be optimal for economic output per capita – as a ‘ceiling’, not a target.

“In previous years, it was treated as a target that the depar

tment had to run around to make sure they met each year. Dutton has changed that fundamentally. I think there will be even fewer entrants in 2018-19,” predicts Birrell.

Population statistics can be confusing – with participants in the population debate often talking about different figures. To be clear: the latest official figures released last month by the Australian Bureau of Statistics reveal Australia’s population grew by 1.6 per cent over the year to the March quarter of this year.

That’s 380,700 extra people calling Australian home. Of those, about a third - 143,900 to be exact – came from so-called ‘natural increase’– the simple balance of Australian births minus deaths. The remaining two-thirds – 236,800 - arrived through ‘net overseas migration’ – the balance of people coming to Australia, versus those leaving.

That figure significantly dwarfs the often quoted figure of Australia’s annual permanent migrant intake, as determined by the federal government each year. Temporary migration – the balance of those arriving and departing on short-term work, holiday and student visas – makes up the difference.

It is changes in this temporary migrant component that have really driven population growth in recent years, says Birrell. “The federal government has not come to grips with that. The numbers leaving relative to the numbers arriving on student visas is just a great gulf.”

As for federal Population Minister Alan Tudge’s proposal this week to settle migrants in the regions, Birrell says it could be done - 1500 foreign doctors are required to work in regions to satisfy their visas – but cautions this would create a “dual class of citizens in Australia”: “those who have to work in regional Australia and those who are free to work elsewhere”.

Birrell offers a far simpler solution: “I think our immigration program is far too high and the simplest thing would be to cut it back,” he says. “We could easily cut back the number of skilled migrants and family migrants. We could trim back the migration program to about half, without any serious danger to employment needs and it would help to take pressure off our cities.”

Such talk is heresy to Australia’s business and economic minds, who point to the benefits of migration in rejuvenating an ageing population and driving jobs and growth.

“I’m telling you that it would be a mistake to slow our population growth,” says HSBC Australia’s chief economist, Paul Bloxham. “Population growth has been a fundamental driver of Australia’s economic success in recent times. Let’s not kill the golden goose.”

According to Bloxham and other economists, the answer to the pressures created by a growing population is not to turn off the taps, but to build the critical infrastructure needed: high-density housing, better roads and public transport, hospitals and schools.

In reality, the population debate goes deeper than economics, to questions of the rights of existing citizens versus potential ones, and how we want to live as Australians.

According to Birrell: “If we rejigged things entirely, and eliminated low-density suburbia, you could put lots of families in high-rise apartments. But immigrants and existing residents regard detached suburbia as central to the lifestyle and don’t want that. They have a right to that. Why should they give up that lifestyle just to accept additional people?”

Australian National University demographer Liz Allan sees things differently. “There’s a thing called the ‘ovarian lottery’,” she says. “All of us who were born in Australia or were able to move here won the ovarian lottery.”

Allan sits on the opposite side of the academic debate over population, an advocate of current immigration settings, which she says are “evidence-based and demand driven”.

“In Australia we like to look to the past and reminisce about the good old days, the 1950s and how great they were for Australia. We don’t bet on ourselves and say we aspire to be New York or we aspire to be Tokyo.”

Allan acknowledges concerns about rapid growth, but says fears are being fanned by opportunistic politicians. “Matters of population and migration feed our deepest and most fundamental fears and concerns about whether we’re getting a fair go. And when you tap into those fears, people build on it with their own experiences, they think: ‘I’m stuck in this traffic, nothing’s working, my health is failing because I’ve got no time to relax and spend time with my kids.' These are things we all feel. It hits at a nerve.”

Allen points to a breakdown in bipartisan support for a demand-driven immigration system. “Population used to be a non-partisan issue. We’re seeing, I think, for the first time in a long time, all sides of politics having a go at problematising population and offering it as a bit of an illusory magic bullet or distraction from the important hard stuff.”

Allen traces the original breakdown of bipartisanship to former prime minister Kevin Rudd’s declaration of support for a “Big Australia” and Julia Gillard’s subsequent retreat. “I think we’ve seen population become a feature in most of our elections since then, really. For the majority of the time, population is a non issue, unless we’re instructed that it should be.”

Allen says Rudd’s intervention broke the golden rule of the Howard era, which was to run a large migration program, but not draw attention to it. “It’s like we don't want to see how the sausage is made, right?” she says.

Of this week’s political interventions in the debate by state and federal Coalition counterparts, Allen says they appeared “carefully orchestrated”.

“Call me cynical, but it looks like population politics 101. Scene one: we have Alan Tudge coming out and creating a moral panic about population, and the stage was set,” she says. “Scene two we had the premier of the most populous state saying we need to put the breaks on in NSW.

“And then in comes [Treasurer] Josh Frydenberg: scene three. And he says: You know what, I’m a migrant also. I see the value and we are here to help the NSW government with the money that’s necessary to build effective infrastructure”.”

“There was this creation of moral panic, a response to that and finally: action.”

Allen is against moves to cap migration and wants a whole-of-government population strategy to plan for the pressures of a growing population. “I think by and large Australia’s migration system is good, it’s strong and that’s because it’s evidence based and demand driven.”

HSBC’s Bloxham agrees Australia’s federal system is a major impediment to better planning and is in need of reform, including tax reform. “The federal government gets to decide the migration intake, but the states are the ones that have to provide all the infrastructure and health services they will need,” he says.

Bloxham concedes economics doesn’t have all the answers: “I don’t know that these are things you can answer with economics. There’s no one right answer. It’s a choice you make to have lower density. Economics can help you understand where we’re at, and help you understand the trade offs about one choice over another. But it doesn’t dictate a particular strategy as optimum. It’s really a choice we make as a community.

“But what I would say, as an economist, is that if you slow population growth down, you will also slow economic growth down and that will slow jobs growth down. It’s not clear to me that’s the right strategy. We have had a run of unprecedented success relative to the world. Do we really want to change that?”

As nations around the globe embrace more inward-looking sentiments and question the fruits of the present economic orthodoxy - from Brexit to Trump’s trade war - Birrell says that’s an open question. “Around the world, the division is becoming sharper. Parochialism is being mobilised. That hasn’t happened in Australia yet. But this week suggests things maybe changing.”

“Whatever your position on it, we’ve now moved belatedly but suddenly in the direction of what’s occurred in US and throughout much of Western Europe.”

With two state elections and a federal election due in the coming six months, the debate over population has only just begun.